The EU and the UK continue to negotiate a free trade agreement. Nonetheless, the possibility of a no-deal Brexit is being seriously considered in London and Brussels.

In the case of a no-deal Brexit, British and EU firms exporting into each other’s markets will start paying import tariffs. Moreover, even if regulations are commensurate, many goods will require paperwork to demonstrate compliance with each other’s regulations. This will be costly.

These higher costs will impact the relative competitiveness of UK and EU exporters, leading to UK and EU buyers of EU and UK products to consider switching to alternative suppliers. However, finding a different EU or British supplier won’t be easy for those British or EU companies that import most of their products from either the EU or the UK.

This blog explores EU and UK trade dependency. We analyse the number of products which the EU and the UK buy mostly (80% of all imports) or exclusively from each other’s markets. This analysis varies by EU member state: for instance, countries like Ireland are much more dependent on UK suppliers. However, due to the EU’s large internal market, the UK is significantly more dependent on EU imports than the EU is on British imports. This blog is based on the paper Globalization Comes to the Rescue: How Dependency Makes us More Resilient which assesses the EU’s trade dependency with the rest of the world. 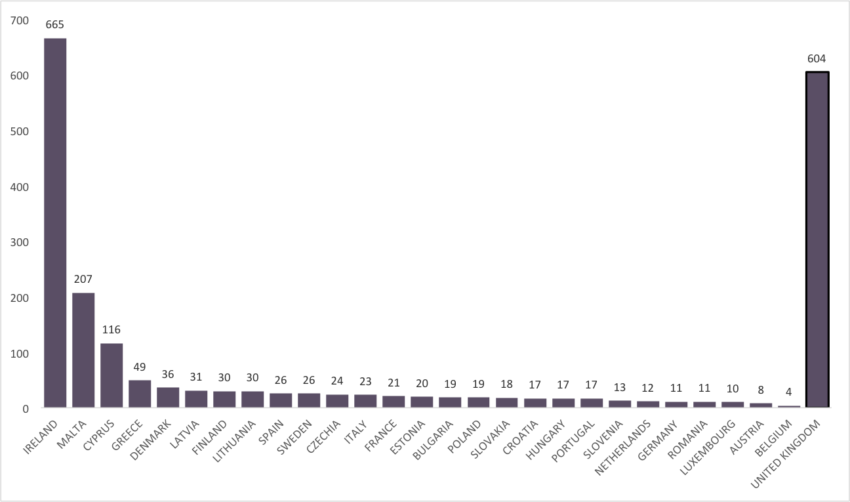 Trade dependency between the EU and the UK can also be seen in the products from which the EU and the UK capture a large market share of each other’s total imports. For instance, EU firms delivered 80% of UK imports in more than two thousand products. On the other hand, British exporters supplied 80% of EU imports in 21 products, which include food products like some specific fish, drinks like Scottish whisky[2], and industrial products like parts for aircrafts.

In the case of a no-deal Brexit, UK importers will have the option to buy from outside of the EU. However, as the UK is establishing its own trade agreements, exporters into the UK from the UK’s main trading partners (with the exception of Japan) will face the new UK global tariff and a new system of UK custom procedures which remains untested. On the other hand, it might be relatively easier for EU firms to search within the EU single market for the products which are currently bought from the UK or buy an alternative product all together. In the case of Ireland, it might be more difficult as 665 products were bought exclusively from the UK. Yet, of these 665 products, which are mostly food and live animals, the UK market share on EU imports is just 7%. This means that there are alternative sources of supply for Irish businesses within and outside of the EU single market for many of these 665 products.

[1] To undertake this analysis, we gather data from Eurostat Comext. The total number of UK imported products in 2019 included in our analysis was 9,177.

2 responses to “What’s the Deal with No-Deal? EU and UK Trade Dependency”