There is a long-standing concern about Europe’s productivity performance, a long-term indicator for sustained economic growth. It is a measure that summarizes how effective we use our economic resources such as labour, capital and skills to create an efficient European economy.

Across the developed world, productivity is one of the most important economic catalysers because at some point economic growth through accumulating skills, capital or labour continue to naturally increase at a slower pace than before. From that moment onward, and hence in the long-run, economic growth comes down the ability to use all these factor in an efficient manner.

The concern with productivity is that aggregate productivity numbers describe a picture that is rather bleak. For over a long period of time now, the level of productivity has remained constant in the European Union (EU) as well as other OECD countries, and does not seem to be capable of showing any significant increase.

Using micro-level data of millions of firms in the EU, a recent report by the World Bank confirms this dim picture in the sense that there is very little movement of productivity over time. The figure below shows in blue the productivity developments in Europe’s manufacturing sector. After the global financial crisis (GFC), productivity went somewhat down and continued hovering around a constant level. 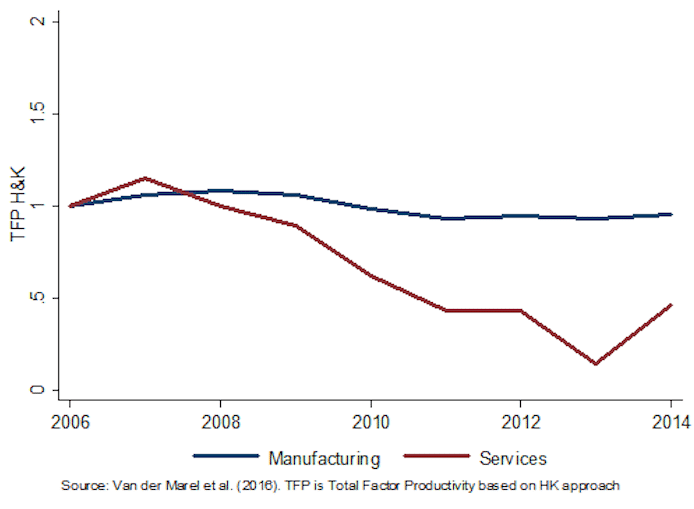 The picture for productivity in services is even more worrying as the figure shows that the time trend for Europe’s productivity developments in this sector is even declining.

Although admittedly productivity for services is a lot harder to define, the gap between manufacturing and services is nonetheless increasing – a conclusion that mirrors recent OECD work to the extent that the gap between the most productive firms at the frontier compared to all other firms is becoming much wider in services than for goods.

In that OECD report called “The Future of Productivity”, the authors investigate the determinants of the future of productivity growth across OECD economies, including the EU. Several take-aways stand out from this work that in my view has clear policy implications for Europe.

One is the importance of capital dedicated to knowledge, or what is called Knowledge Based Capital (KBC). Investment in KBC spans R&D, know-how, firm-specific skills, design and various forms of intellectual property as the OECD defines it. According to the Paris-based think-tank, increasing KBC investments would likely further enhance productivity, which across economists is well-accepted.

But, this conclusion would be particularly relevant in the current digital era. Therefore, any policy that creates or inhibits the development of KBC becomes an important item to watch, including policies related to the movement, storage and deployment of data across borders and other digital (trade) policies on which many business models and current know-how is built on.

Other examples of digital trade policies next to these data policies include the mandating of the use of specific technologies, the adoption of certain standards for digital firms, or the disclosure of proprietary information, which all amongst many others policy measures would stifle productivity growth through lowering the effective use of digital knowledge capital.

Second is increasing competition through reforming product and labour market policy regulations. The OECD report notes that the existence of many small and relatively old firms in some European countries negatively affects aggregate productivity (and employment growth).

If that’s the case, then reducing entry barriers won’t be enough. What is then needed is reforming conduct policies to increase market dynamics so as to help young dynamic firms flourish in case they are more efficient and better than others, replacing the ineffective ones, which are often older and less innovative.

Indeed, a recent World Bank policy research paper finds that in the EU even though entry barriers still matter, what is crucially if not more important for productivity to revive is what happens to the firm in terms of policies behind the border, after market entry has taken place. Or in other words, policy barriers related to the operations of the firm such as the rules on the form of business or the lack of recognition of insurances, lack of clarity where social security contributions are recognized, etc.

Third, the OECD report also calls for better diffusion or dissemination of innovation from ahead-of-the-curve companies to the so-called second and third-tier group of successful firms so that they become more productive, further increasing overall productivity by spreading its benefits. As noted above, this would be particularly pressing for the services sector.

The three items are somehow related. To the extent that productivity in services can be increased, their intangible nature should make is easier to flow across borders and firms facilitating them to enter into new markets or transmitting new business ideas through digital enabling factors such as the internet, software and data.

What then matters are policies that enhance the digital entry of new firms and policies that target the increase of digital operations of existing productive firms in markets of especially services. Much of the policy attention to increase Europe’s productivity should therefore focus on this part of the economy.