A common version of trade theory suggests that countries will specialise in a limited number of products. Using the example of David Ricardo from 1817, England specialises in cloth and Portugal in producing wine – and then they trade with each other to mutual benefit. However, this is a crude version of comparative advantage that routinely leads to political concerns about trade. Today the prime concern is that Europe and other developed countries have become too dependent on China by allowing the logic of comparative advantage to work. In short, trade has made us vulnerable.

The observed reality is different. Most advanced economies produce and export a broad range of goods and services. Their governments have similar aspirations to develop and support diverse manufacturing and services, including in the most traded global sectors such as pharmaceuticals, automotive, business services, and food and drink. Modern specialisation comes in countries producing various, but not all, products within global supply chains. Patterns of trade suggest such specialisation has allowed countries to both grow and become resilient to individual shocks. Knowledge and ownership of the whole supply chain is more important than producing everything.

Comparative advantage has not as some would suggest led to each country in the world producing only a certain number of goods or services. Indeed, considering major developed economies in Europe and North America we see strong correlation between income levels and diversification of exports. Developing countries specialise in a limited number of typically primary commodity exports, and broadening to a wider range is associated with greater income. 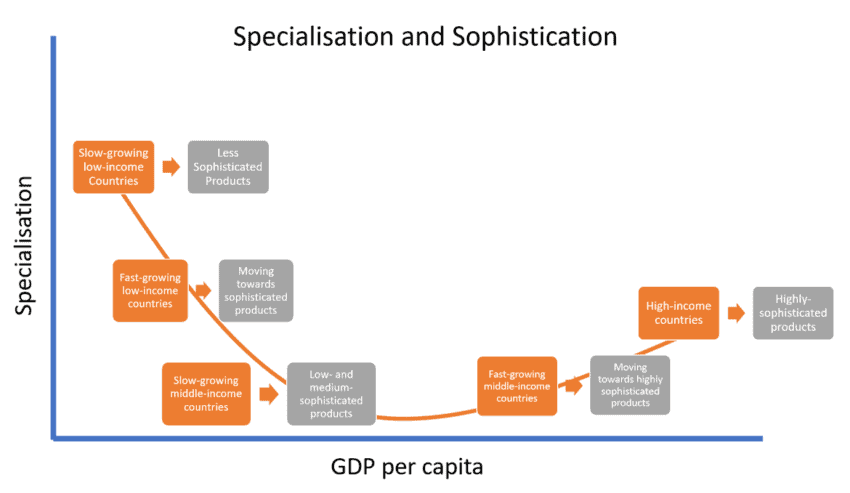 At the highest income levels, countries may show a marginal tendency towards specialisation of highly sophisticated products. However, the overall pattern is one of varied production in more developed economies.

The principles of comparative advantage can be seen in long-term specialisms, whether financial services in the UK or automotive in Germany, as well as these highly sophisticated products. Neither are however international monopolies.

Reconciling comparative advantage, diversity, and this specialisation seems to come through a dynamic process of economic development. Companies and innovators seek new opportunities bound by constraints such as skills, existing businesses and infrastructure within a country.

Producing a broad variety of products allows innovations to apply across them, as well as encouraging further investment, making the process a virtuous circle. For example, knowledge of particular sectors in specific countries may help raise investment capital. Producers in other countries will however seek to learn and copy, providing different options for supply chains while still roughly consistent with comparative advantage.

The growth of trade through supply chains comprising numerous intermediates since 1990 fits well with this interpretation. Vastly increasing the number of products traded amplifies the opportunity for countries to specialise while cross fertilising innovation as well as maintaining some production of basic goods.

Free trade helps this process by reducing an incumbent’s blocking power. Hence a key benefit of free trade agreements is in reducing barriers to imports. It should however be noted that this involves labour market adjustments, of individuals losing jobs in areas of comparative disadvantage, which is politically problematic.

This more complex view of comparative advantage is a far cry from the cloth and wine cited by Ricardo. In the current geo-political environment, as countries complain about job losses, we should however be able to show that the broad principles of trade creating mutual benefit still holds.

Many critics of the current globalisation suggest that it leaves developed countries without serious manufacturing at the mercy of China. However, this view is not supported by the evidence, which shows production of goods continuing even in the richest of economies.

The Economic Complexity Index (ECI) analyses the complexity of individual economic activities and then measures how significantly these are present in different countries. When this is considered against GDP per capita it shows more developed economies undertaking varied complex production. 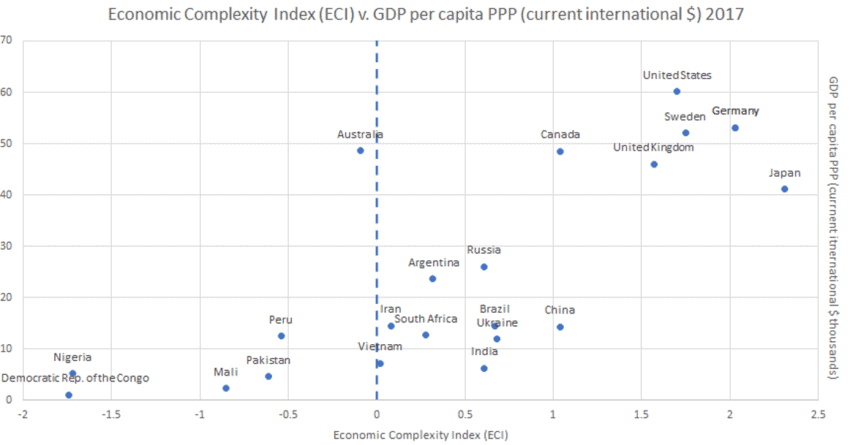 Looking at countries that consistently score among the highest on the ECI, such as Japan and Sweden, some trends emerge such as only having 1-2 products that represent more than 5% of exports, a broad range of other exports, and significant services exports. There also appears to be a trend among these high scorers in exporting Cars, Vehicle Parts, Integrated Circuits, and Packaged Medicaments, goods that could be considered ‘sophisticated’ in terms of the level of skill required and the activities involved in their production. This does not necessarily mean these countries are producing pharmaceuticals on-site start-to-finish, but rather that they are specialising in the high value-added stages of a particular good’s production, as well as having companies with understanding of the whole value chain. 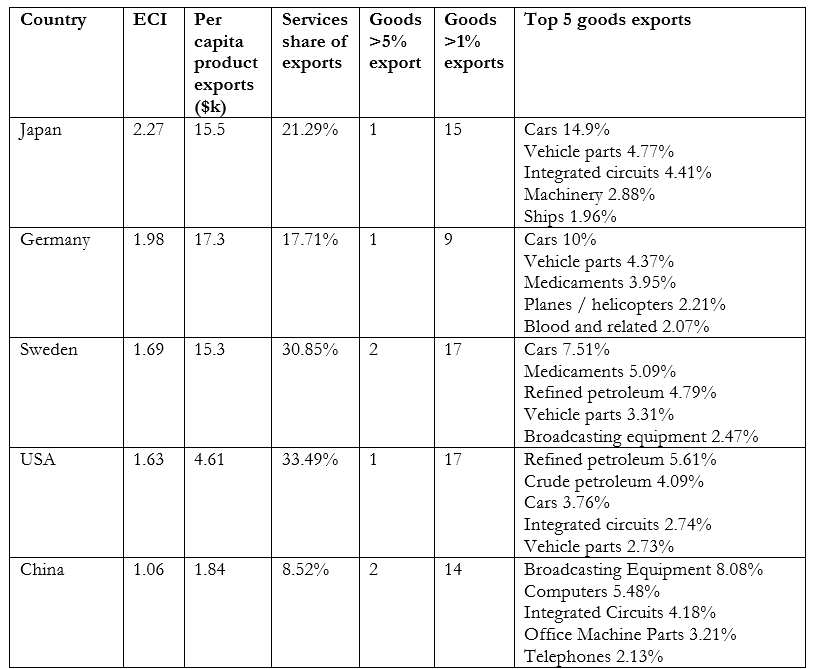 In summary, richer countries tend to diversify around high value-added human and physical capital-intensive sectors while low-income countries have net exports in resources or labour-intensive goods. As production processes become globally fragmented, the specialisation of countries increasingly occurs at the level of activity, rather than products per se.

Specialisation and comparative advantage as they relate to modern global trade will continue to be much discussed, but it seems clear from the evidence that economies can be both diverse and specialised. The most advanced economies demonstrate innovation across a range of sectors, and should therefore be able to adapt to changing circumstances quickly.

The implications of this are profound in the debates about national resilience. In the past year there has been an upsurge in sentiments of economic nationalism and calls from developed country leaders for the ‘re-shoring’ of production in various sectors. These are based on the assumption that certain production has been lost forever because China has comparative advantage in those areas.

What we see instead is that modern economies are diverse and sophisticated, subject to constant innovation, and theoretically able to modify what is produced. On this basis there should be less need to ensure everything is locally sited, albeit that ensuring diverse sources of imports will still be important. Given the complexity of modern products, that should be reassuring. It is more important to have knowledge of the production process rather than guarantee it all remains domestic.

Indeed, excessive specialisation in exports can create risks. If an over-dominant sector is hurt both exports as a source of national income and employment can be damaged. Import substitution has similarly shown many failures in the past.

Such risks are particularly clear in natural resource-rich nations that often specialise into mineral/energy sectors. However, they are equally relevant across all sectors with ongoing rapid changes in technology, and the ever-present risk of unforeseen symmetrical shocks, such as a pandemic.

It remains the case that trade, as Ricardo would predict, has delivered greater prosperity. That comes not through individual economies doing everything, but equally not through a simplistic implementation of 19th century concepts.